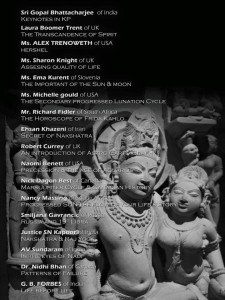 My January 2016 article in the Krishnamurty Institute of Astrology’s 26th International Conference magazine deals with a western astrological technique called, Secondary Sun Progressions. It is a simple yet highly effective technique that explains and times periods of great identity changes in our lives.  How we ‘progress’ and change internally throughout our lives.

The simplest form of the technique is when our Sun sign (which moves by a degree per year) progresses into the next sign. Every life-time depending on the day of your birth (degree of your Sun sign) as well as the length of life, gets to incorporate approximately three Sun signs past the birth sign. If you are born a Gemini with your Sun at 9° then there would be a big change in your identity and events in your life at age 21, 50 (every sign has 30°) and 81. The communicative, inquisitive and restless Gemini learns how to incorporate the principles of family, home roots, protectiveness from the age of 21. Thirty years later the Sun progresses into Leo around the age of 51 which will see a more confident, generous and creative Gemini blooming. At age 81 studies, thinking and analytical faculties become more detailed and refined as Virgo qualities are incorporated. Thus per example, the Virgo Sun grows in Libran, Scorpio and Sagittarius abilities and the Capricorn Sun traverses Aquarius, Pisces and Aries.

In this article I used the chart and life of Leonardo DiCaprio who was born on the 11th November 1974 to exp. He has a Scorpio Sun at 18°40′ (rounded off to 19° for simplicity). He’s Sun progressed in to Sagittarius (period of expansion…) when he was approximately 11 years old. This was his first time of fame starring in Growing Pains. At the time of writing the article (beginning of December 2015), Leonardo had just had his second Sun progression into Capricorn which is the sign of responsibility, hard work, seriousness and success. My paragraph reads:

“Leonardo is currently experiencing the 2nd ingress of his progressed Sun into Capricorn. Thus, another big identity change is sparking his next 30 year long journey. From this we can expect a career boost [success], or a more serious and responsible Leonardo perhaps…? It’s just been announced (a few days prior to writing this article) that he is one of the 2016 Golden Globe Awards’ nominees for his performance in The Revenant. Watch this space…!”.

He won the award on the 10th January 2016 and delivered a most responsible and conscientious acceptance speech.  These are pivotal periods in our lives and I would think that we will hear quite a bit more about a serious and responsible Leonardo over the next few years.